Posts tagged beliefs that are holding us back

When a Belief Become a Truth 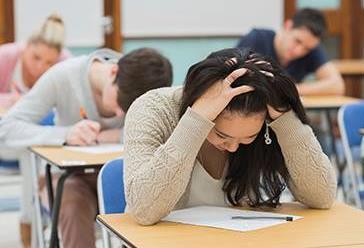 When a Belief Becomes a Truth

What came first? My anxiety around taking a test or the core belief that I am not good at it? Somehow they seemed intertwined. Often there is a series of events in our life that collectively produces a core belief. These past events reinforce the belief. I was curious, why did I have this belief that I am not good at taking tests? What had happened in my childhood to create this belief? And, how can I change it? Let me share how my belief became a truth.

To change a core belief with EFT, you need to access the childhood memories that contributed to this belief and then tap on them.  I was working with an EFT practitioner to address this issue. As we started to tap, five memories came up.

The 1st event was when I was 8 years old, both myself and a friend got two answers wrong on a test. She received a “B” as her grade and I received a “D” as my mine. When I approached the teacher and said there must be some mistake, she replied, “Anyone who is stupid enough to get those two questions wrong deserves a D.” Can you imagine how devastating it was for a small child to hear that?  See my blog above to read the whole story.

The 2nd event that contributed to my core belief was when a teacher in third grade tried to trick us on a test. She had always preached, “Read the entire test before you start.” Since I wasn’t a good test taker, I didn’t want to take the time to read thru all the questions. I was worried if I did that, I wouldn’t have enough time to finish. Sure enough on the last question it said, answer only the even numbered questions. I was so mad with this teacher because tests were stressful enough for me without her taking pleasure in tricking us.

The 3rd event in my life was that I had to attend a special reading group for those kids that had trouble remembering what they read. Going to the special group made me feel like one of the “stupid kids” who couldn’t read. Most of the other kids in that group didn’t care about school. I was the one that studied, did all the homework and really wanted to do well in school. Why was I in a group with the troublemakers who didn’t give a hoot about their grades?

The last event that contributed to this belief was when I was 16 years old and wanted to get my driver’s license. I had to take the test three times before I passed. I was upset when I failed. In my mind it was just another example that am not good at taking tests.

I had no idea these events were collectively creating this core belief.  It was like I kept proving to myself that it must be true. I assumed that there was nothing I could do to change it and it was just the way I am. I wish I had known about the benefits of EFT tapping back then!

As we started to tap on all of those memories, I was able to remove the emotional charge from those childhood events. The EFT tapping helped me eliminate the past triggers that were impacting the current situation (text anxiety).   After a while, the belief that I am not a good test taker seemed to disappear; that statement no longer felt true for me. I began to feel a new sense of calm and I was able to replace that old belief with a more empowering one.

A core belief can be a limiting belief that we carry with us thru out our lives and it can keep us stuck because we have accepted that core belief as our truth. What truths do you carry around with you that are holding you back?  What childhood memories have added to your core beliefs?  And, what limiting beliefs do you want to change?

To learn how EFT can work for you, schedule your free 20 minute consultation now. Contact Juanita.

anxiety
beliefs, beliefs that are holding us back, core issues