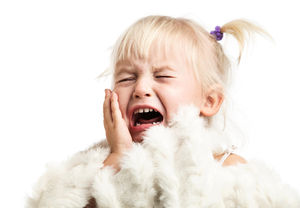 I recently met Gretchen. (Her name has been changed. With her permission, she has agreed to let me share her story.) Gretchen came to me because she was frustrated and disappointed in herself.  When her baby starts screaming, her automatic response is to start yelling at the same time. She shared with me how she purposely waited to have children because the last thing she ever wanted to do was yell at a kid or be a mean mom. With a feeling of despair she said, “I am exactly what I don’t want to be.”

Gretchen grew up in a family with six children. Her mom’s response for dealing with the constant chaos was to intensely yell all the time.  As a child, Gretchen remembered being forced to sit there and wait for her mother to stop yelling. It was scary for Gretchen not knowing what her mom was going to do next. Gretchen would get dizzy and almost blackout because she was holding her breath. And once her mom was mad, she would be mad for so long and the child or children in trouble were blamed for putting the mom in a bad mood.

When Gretchen realized she was reacting exactly as her mom had done, she felt ashamed. How could this be?  Gretchen wanted to believe that she would be different and have better parenting skills. She didn’t want this to happen to her…yet it had.

We started tapping on all the feelings that Gretchen had as small child when her mom was screaming at her. Some of the emotions that came up for Gretchen were: she felt scared and dizzy; she had no control while the mom was yelling at her; she believed she was a burden to her mom; she didn’t understand why her mom was yelling so much and she assumed it was her fault her mom was mad all the time. I then asked Gretchen to share what that little girl wanted to say to her mom but never could. We tapped on what Gretchen said:  Mom, please calm down, please stop; I love you so much; we try to be good; I wish you were happier; I wish your life was better and I’m sorry mom, we want you to be happy.

The tears were flowing; it was a powerful release for Gretchen. After Gretchen had released those blocked emotions from her body, her energy began to shift and she started to feel lighter. We then started tapping on Gretchen’s current situation of yelling at her baby when she starts to cry. She voiced all her concerns about being a good parent and we tapped on those.

As children we learn what we see. It makes sense that Gretchen’s natural response was to mimic what she saw growing up.  Gretchen had no idea that her childhood experiences had become a negative trigger in dealing with her own child.

At the end of the session, Gretchen said she felt amazing and was shocked she felt so good. The next day, I received this lovely email from her. This is what it said. “Today was amazing. The frustration that I would normally have felt was not even there. I had so much more patience with my daughter and I enjoyed her more easily. And when she cried or screamed, I didn’t feel like it was a personal attack on me! I just saw it as a baby crying and was able to help her. I can’t believe how different I feel. I am so grateful for the work you did with me. Thank you so much.”

How many times have you thought to yourself, I’ve become just like my mother? It doesn’t have to be that way.  This story illustrates how EFT tapping can be used to break an old pattern or change a behavior that is not serving us. You can use EFT tapping to become the person you were meant to be… or the parent you want to be.

To learn more how EFT Tapping can work for you, contact Juanita at to schedule your free 20 minute strategy session.